Here is SUZY MENKES  report  for Paris Fashion Week day 4, some of the shows that day included looks inspired by clinical atmospheres , for example at Takahashi the models on the catwalk wore surgical white coats with embellished sharp knives,  the clinical surgery inspired looks from Japanese designer Takahashi.  Them from Chalayan the models wore clothes inspired with mystery..what happened to the sleeve on the designer’s coat?  Why is there just the one sleeve? And his pretty cloche hats with one side removed…what Cloak and Dagger reason did Hussein Chalayan have for creating this fashion crime?   The mystere was solve backstage with two words from Chalayan  Agatha Christie, the theme for his looks on the runway, actually inspired by Agatha Christies novel  Murder on the Orient Express!!

Also in this story other designers showin on Day 4 of Paris Fashion Week reviewed here are  YOHJI YAMAMOTO: FASHION POET ,  and MAISON MARGIELA: TELLING STORIES, and BALENCIAGA: SUBVERSIVE ELEGANCE, and DIOR: ANIMALISTIC AND ARCHITECTURAL, and of course LOEWE: THE LIFE SCIENTIFIC,  and ISSEY MIYAKE: LETTING OFF DIGITAL STEAM,
MAIYET: FASHION’S BRAVEHEARTS!! This was a fabulous day at Paris Fashion Week,  showcasing some of my favourite designers, and I hope you enjoy!! Just follow the link below to read the review of the day, as written by Suzy Menkes,  whom might I add,  I idolise and find inspiration

Chalayan has often worked with themes, and his skill as a tailor and draper have sometimes been lost in the complexity of this thoughts. But this was a textbook example of how to take inspiration and absorb it into clothes. Every fashion school should put it on the agenda for students to understand the sophistication and sensitivity of weaving ideas into output. 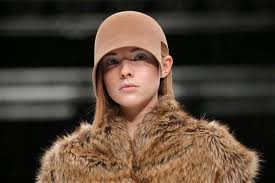 Inspired by Murder on the Orient Express, the designer had taken elements of that famous story and its film version and absorbed the tension and the mystery into fine modern clothes.The cloche hat was taken straight from the Thirties, but the other clues were subtle: the snow gathering into a storm, so essential to the novel’s plot, was absorbed as a digital pattern. So were the mountain ranges. Yet neither seemed intrusive.Chalayan has often worked with themes, and his skill as a tailor and draper have sometimes been lost in the complexity of this thoughts. But this was a textbook example of how to take inspiration and absorb it into clothes.

DIOR ANIMALISTIC AND ARCHITECTURAL
“I’d like one of those suits, and a couple of those boots,” Dior guest Dakota Johnson said. “The show was awesome, really edgy.” The star of the moment in Fifty Shades of Grey might as well have said “Those boots”, for all eyes at the Dior show were on the seductive footwear with Lucite heels that the designer Raf Simons had already shown in January’s haute couture. Intriguingly, some of the finest pieces in this down-to-earth (or at least down-to-elegant city street) collection had elements from the past that the designer is making his own.

First, a long, shrug-on, fondant pink coat was an atavistic reminder of one that Raf had produced in his final collection for Jil Sander. The fashion world had imagined that exquisitely stream-lined tailoring was the reason for Dior choosing him as Creative Director. If that were so, President and CEO of LVMH, Bernard Arnault, sitting front row, must have rejoiced in this Dior collection, with a focus on real clothes with a few lively pops of ingenuity – like the wildly patterned body suit that was also grounded in couture. “I like the idea that couture provides the initial concept. I had so many reactions and it makes couture seem more modern,” the designer said.

Martin Margiela is a designer who chose invisibility as his USP while John Galliano is one the most high profile designers of the age and a man who loves to experiment with his own image. This first show was exactly what you might have expected from the pairing of these opposites. The restrained number of outfits played with deconstruction and the tenets of tailoring, salvage and restitution, luxe and tatters. A breastplate of shells might have adorned a trash-can Boadicea, a dress of carved black leather ribbons fell away into a tattered train. While a Principal Boy opened the show in Harlequin leggings of black and flesh it was closed by a ghostly empress, veiled and silenced by a pearl and bronze mouthguard. Yes there were a few clothes – a perfect black blazer, a mandarin-collared red velvet gown, an immaculate tuxedo suit to rival the work of any couturier and a single draped LBD but it wasn’t a collection intended to scoop up orders (despite the humorous soundtrack of a remixed “Big Spender”). Instead it was a carefully calibrated marker of intent, from the white coated attendants that littered the building (a Margiela legacy) to Galliano’s blink-and-you-missed-him fleeting appearance on the runway at the end of the show (in contrast to his lingering, theatrical performances of old).

A young woman clutches her bag, lips smeared scarlet, her hair orange, and runs bent-double down the street. Her hat is pulled right down. Something is going on.John Galliano has always been fashion’s great story teller, the designer for whom the stage set alone once exuded heartfelt emotion.

And in a fashion season where a little madness could only be welcome, that is just what John produced for his first ready-to-wear collection for Maison Margiela.

Just what these young women were up to in their clothes of many colours was not clear. But just stepping out in a canary yellow ankle-length coat with DayGlo orange gloves was a fashion statement.

Maiyet’s founders, Kristy Caylor and Paul van Zyl, have strived – and succeeded – to avoid making this a do-good brand for so-called “pity purchasing”. Their clothes and accessories are luxury products, all first rate in design and make.The Scottish architect Charles Rennie Mackintosh was an inspiration for Kristy. “He was an architect and an artist and he did these beautiful floral motifs, combined with linear patterns, both Art Nouveau and Modernist,” she said, adding that the cliffs and rolling hills of Scotland also influenced the collection. The designer used well the artist’s flat roses and geometric tropes as subtle decoration.

The atmosphere was so peaceful at the Maiyet show that the hurried and flurried fashion crowd sank into the seats to enjoy the setting by architect David Adjaye, who created a canopy out of 10,000 metres of ribbon. Add the gentle music of Brooklyn-based composer Bryce Dessner and the scene was set for this company, which has succeeded in doing good while making fine clothes.

Alexander Wang brought some New York club attitude to his Balenciaga show at Paris fashion week on Wednesday night. Models wearing dramatic, floor-sweeping coats and mirrored sunglasses strode across a geometric glass catwalk suspended over swirling dry ice. It was a step change in atmosphere from the rarefied morning slot that Balenciaga has previously occupied, suggesting that, after four seasons in charge, Wang – who splits his time between his own label in New York and Balenciaga in Paris – is now fully confident in the direction he is driving the historic French house.Alexander Wang has never before designed a colection with such a perfume of the past. The inspiration of the original Cristobal Balenciaga, who died in 1972, was helped by Lady Gaga vogueing on the runway before the start of the show, while Gaga and Kate Moss then posed together, showing off the formal and the casual side of the brand today.

Since Alexander Wang’s tenure as Creative Director at Balenciaga he has never before designed a collection with such a perfume of the past. The inspiration of the original Cristóbal Balenciaga, who died in 1972, was helped by Lady Gaga vogueing on the runway before the start of the show, while Gaga and Kate Moss then posed together, showing off the formal and the casual side of the brand today.

SCIENTIFIC  ON THE CATWALK AT LOEWE
As the last silvered skirt and puddling trousers crossed the stone floor of the Unesco building at the Loewe show, I went backstage to get the designer’s take on his collection. “Scientific!” exclaimed Jonathan Anderson. “It had to be something that felt new.” In previous menswear and womenswear collections, Jonathan has been making a good job of capturing Spanish elements – the sandy texture of an Ibiza beach or the stone walls of a Madrid bridge. But if there were references here, I did not grasp them. A metallic silver top and royal blue pleated skirt? A Costa del Sol nightclub perhaps. A softly pleated cream top? Elegant for strolling  the Rambla in Barcelona. Black broken lines on a red skirt? A Gaudi reference or a circuit board? Whatever. The colours that seemed so plastic for the clothes were splendid for the bags and ringlet belts. A bright blue squishy bag, a yellow envelope clutch, a green belt and even a beige bag with looped leather handles all seemed right for Loewe. Even the modernist jewellery was striking.  Jonathan Anderson has a real flare for accessories. Maybe he should let the dazzling Spanish sun go down on the eye-popping colours and surfaces of his clothes and let the accessories shine.

As the last silvered skirt and puddling trousers crossed the stone floor of the Unesco building at the Loewe show, I went backstage to get the designer’s take on his collection. “Scientific!” exclaimed Jonathan Anderson. “It had to be something that felt new.”

Issey Miyake, the brand’s founder. always had a sense of drama in his presentation. I remember many shows that brought the clothes to life in a spectacular way. So it is good to see that Yoshiyuki Miyamae, who now holds the reins as Artistic Director, producing shows that enchant as well as inform.When models in short skirts twirled around, the fabric unfolding to full length as if by magic, I recalled the many ways this company, over the years, has taken a presentation beyond mere clothing.

But the great skill of the current designer is to create performance art, this season using a Japanese musician and singer, and to concentrate visually on the way the collection takes shape in colour and texture.

It started with 3D Steam Stretch fabric technology developed by the Miyake company. The technique is that material pre-woven with ‘mountain and valley’ folds, becomes, under steam, permanent three-dimensional patterns.

It sounds complex, even weird, yet the effect was rich and colourful, with the depth of shades in plum, moss, and purple quite eye-popping. The designer explained the processes in show notes. The important part was that Miyamae and his Tokyo team have taken three seasons to  perfect this textural revolution.